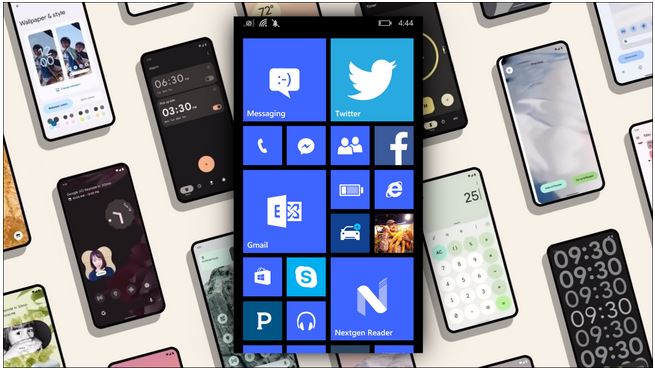 Windows Phone wasn’t around for very long in the mobile OS world (2010-2017). It was never particularly popular, but Microsoft filled it with numerous innovative concepts. A couple of the suggestions turned out to be ahead of their time.

Windows Phone 7 evolved into Windows Phone 8 and finally Windows 10 Mobile, but the same issues persisted—where were the third-party apps, for example? Nonetheless, it had a significant impact on the mobile business.

The minimalist design of Windows Phone is one area where Microsoft was certainly ahead of the curve—perhaps even responsible for beginning the trend.

In 2010, Microsoft released the initial version of Windows Phone, which looked like the image at the top of this page: White symbols on solid color tiles; very simple and flat. In the meantime, Android 2.3 Gingerbread and iOS 4 looked like this.

It doesn’t take a software design degree to recognize that the Android and iPhone interfaces have aged poorly, whereas the Windows Phone UI could easily pass for a modern operating system. In the years afterwards, Apple and many Android device manufacturers have embraced more simple, flat designs.

Apple’s widgets, which were introduced in iOS 14, are based on a similar concept. They’re still separate from the app icons on the home screen, but they have the appearance of larger app icons. The app’s name label is still visible beneath it. It wouldn’t surprise me if Apple adopted Windows Phone’s implementation in the future.

Dark and light settings are now available on both Android and iPhone, but this wasn’t always the case. In reality, they both added it in 2019, despite the fact that it was part of Windows Phone from the start in 2010.

The system-wide dark and light themes that we see in Android and iPhone these days work quite similarly to Windows Phone. Many UI elements, as well as apps that enable the capability, would change to match the system theme. Microsoft was over a decade ahead of Apple and Google in getting this right.

“Material You,” a new theming system in Android 12, was announced. It creates a color palette based on your wallpaper that is applied to various parts of your phone. Accent colors are available in the Quick Settings panel, system apps, and third-party apps that support them.

This is yet another feature that Windows Phone has had from its inception. The color you chose for the Live Tiles would be useful in a variety of situations. It wasn’t simply a home screen accent color; it was also the accent color for system settings and any third-party app that opted to support it.

Although this isn’t a game-changing innovation, Microsoft did beat the iPhone and Android to native song recognition. Third-party apps like Shazam were available on both platforms, but Windows Phone users could perform it directly from the Bing app.

Google Assistant can now swiftly recognize songs, and Pixel phones can do it without you having to ask. The iPhone also has a built-in Shazam button that can be added to the Control Center, and Siri can perform it as well. This may seem insignificant, yet Microsoft was the first to do it.

Windows Phone, like its brothers defunct mobile operating systems WebOS and BlackBerry OS, had a lot to offer the mobile market. Because of Microsoft’s ideas, Android and the iPhone are better now. Companies are pushed to develop and adapt as a result of competition, but it also implies that someone will lose.